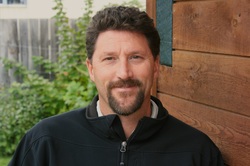 As a part of Grammy nominee Kate MacKenzie's touring band, Dale has performed across the U.S. and Europe . Many of the Northwest's premier Bluegrass bands have benefited from Dale's creative mastery of the guitar including the groups Out of the Blue, Dr. Corn's Bluegrass Remedy, Frontline, True North, Old Growth Acoustic Quartet.  Dale can be seen playing a mahogany Preston Thompson acoustic guitar built in Sisters, OR.

Dale is currently playing with guitar legend Dan Crary, Old Growth Acoustic Quartet, True North, Brokentop, and "AFB" - code for the Adkins Family Band. Each band offers a unique approach to acoustic music. With the release of “Alone in the Red Room,” Dale has opened a new musical chapter. The CD is a significant departure from high-energy bluegrass flatpicking, and shows a dimensional fusion of the fingerstyle guitar played with a flat-pick.

Dale Adkins' musical influences can be traced to his parents' love of music with many hours spent playing and singing at home and family reunions . By the age of six his instruments of choice were ukulele and banjo, by sixteen his love for the guitar had eclipsed his other interests.


After graduating from Willamette University and earning his Education degree at Oregon State University , Dale focused his passion for guitar on the flat-picking style of playing prevalent in today's bluegrass music. During the burgeoning bluegrass scene in the Pacific Northwest in the 80's and 90's, Dale emerged as the guitar player of choice amongst his contemporaries, often being compared to such masters as Clarence White and Tony Rice.


Amongst his many musical interests and activities, which include writing, recording and producing, Dale continues to influence and inspire many students in his position as co-director and instructor of music programs associated with the Wintergrass Bluegrass Festival and the highly successful Bluegrass at the Beach workshop series. Dale has added the mandolin, acoustic bass, and 5-string banjo to his musical repertoire and has had a profound influence on his own son and daughter who are tearing up the northwest and beyond as part of the Bluegrass Regulators..